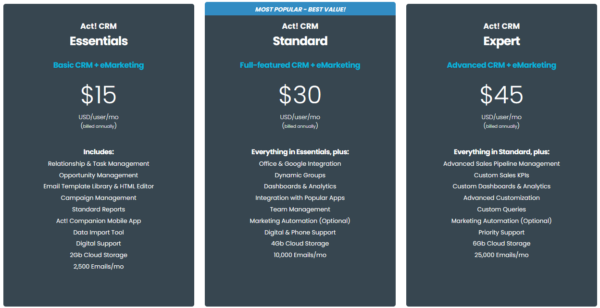 On 10/15/20 Swiftpage, the makers of Act CRM software introduced a new SaaS (Software as a Service) product  with three levels of service, as well as, monthly subscription and yearly subscription pricing.

Act has long been a desktop CRM software program.  Over time, and most recently in the last few years Act has offered its service as a subscription.  When you subscribe to Act you received the desktop software and the option to connect Act desktop to a cloud version of Act.  The desktop version of Act synchronized with the cloud version.

Many of my clients purchased a subscription and added to that the cloud component.  Mainly, because it was a very inexpensive and professionally managed server for your Act data.  Hosting is approximately $120 per year per user.  In addition to having Act on your desktop and laptop computers you could also access all of your data via Act’s cloud environment.

So what is the new Act CRM SaaS product?

Act’s new SaaS product is self-serve.  You start with a free trial and at the end of the trial you have to make a decision on one of three levels of service:

Each tier offers Act eMarketing, free support (either digital or phone support depending on the package) and between 2 and 6 GB of storage.  Act Marketing Automation is offered as an add-on.  This allows you to automate and create drip campaigns. As is, it is great for email marketing campaigns. 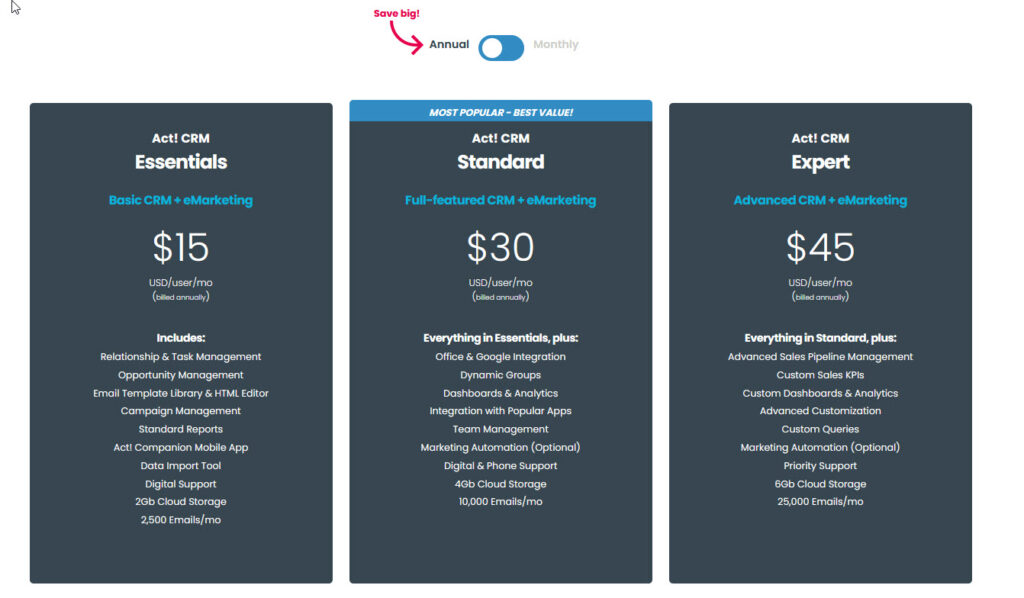 An Act Subscription is $300 per year.  If you would like to use Act in the cloud that is an additional $120 per year per person.  Act Premium Cloud enables you to have Act desktop software on two computers, for example your desktop and laptop computers, and that data stays synchronized via the cloud component in this equation.

You can also access your complete Act database in your favorite web browser.  Act via a web browser acts and responds differently than the desktop version of Act.  If you are a long time Act user and accustomed to using Act on your desktop you will find the experience different.   Not bad, just different.

If you want to add marketing automation to your account is approximately $960 per year paid annually.  If you currently use Act and have a large database it might be worth creating a separate sass account just to do your email marketing.  I am throwing this idea out there because I want you to have the best experience using Act software as possible.

What is in a name?

The good folks at Act are working very hard to give you as many options with their software as possible.  Over the last few years they have offered different promotions and have given those offerings different names.  Act.  Act Premium Cloud.  Act Premium subscriptions.  Act Pro.  Act Growth Suite.

Honestly, they have made so many name changes I even find it confusing.

At the end of the day Act is like a hammer.  If you plan wisely and use it as the tool it is designed to be it can be a wildly effective piece of software for you and your company.  It takes planning and patience, foresight and hindsight, and the ability to set goals for you and your staff.

Would I strongly recommend Act for your company?  Absolutely.  I would have to talk to you in more detail before I decided on which version makes sense for you.

When choosing which Act product and service is best for you I urge you to get some guidance.  I’m reachable by phone and happy to answer your Swiftpage Act questions.  Act SaaS or Act CRM online is a good choice on many levels.  I can help you determine if it is a good fit for you and the way you would use Act CRM.